VOLCANIC HISTORY OF THE SUTTER BUTTES

The first eruptions at Sutter Buttes occurred about 1.6 million years ago, in the early Pleistocene, when magma pushed upward through the thick pile of Sacramento Valley sediments. Some of the magma breached the surface to form extrusive domes in the rocky core of the Buttes. Explosive eruptions pulverized the extruding magma, depositing blocky fragments and volcanic ash that hardened into pyroclastic (“fire-broken”) rocks. 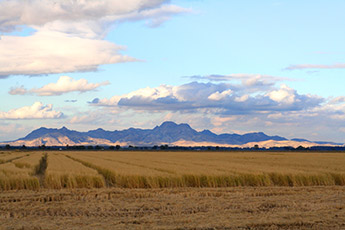 The first lavas to erupt were light-colored, often white, rhyolites—rocks rich in silica (SiO2) and alkalis (potassium and sodium) but poor in magnesium and iron. The extruding lavas were so viscous that they accumulated at the surface as thick, pasty blobs, or lava domes. After about 30,000 years, these rhyolites were followed by more voluminous eruptions of andesite and dacite, lavas lower in silica and higher in magnesium and iron than the earlier rhyolites. Forming much larger domes, the andesites and dacites are darker in color than the rhyolite, typically medium to dark gray, contain abundant large crystals, and are commonly oxidized (rusted) to brick red.

The andesite-dacites erupted through numerous vents distributed throughout the castellated core. In addition to the magma that erupted at the surface, much andesite-dacite magma lodged below the ground as intrusive bodies, spreading and lifting the preexisting sedimentary layers. In this way, originally horizontal sedimentary layers around the perimeter of the volcano were bent upward to vertical and in some places overturned. This deformation is best displayed in the south moat of the volcano.

The eruption of voluminous andesite-dacite continued until about 1.4 million years ago, creating the 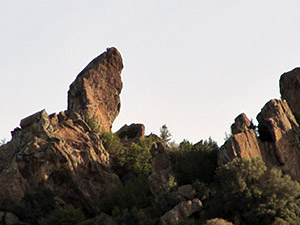 mountainous interior of the Sutter Buttes. Eruptions of volcanic domes were at times explosive because of an abundance of gases (mostly water vapor, carbon dioxide, and sulfur gases) in the magmas. The explosive eruptions fractured the dome rocks into fragments ranging from fine ash to giant blocks. These pyroclastic materials were carried downslope from the domes as slurries of debris made fluid by either hot volcanic gases (pyroclastic flows) or liquid water (lahars). The very hot pyroclastic flows and the cooler lahars accumulated around the base of the castellated core in layer after layer of debris, forming the gently outward-sloping rampart, a continuous debris apron or “fan” all the way around the castellated core of volcanic domes and over the truncated top of the surrounding moat sediments.

The lowermost, rhyolitic layers of the rampart are exposed in only a few areas on the outer part of the moat valleys. These rhyolitic pyroclastic deposits are overlain by thick deposits derived from andesitic-dacitic pyroclastic flows and lahars. The uppermost layers of the rampart contain the largest blocks (about 30 feet in diameter), derived from the youngest, tallest, and best preserved domes of the core (South, North, West, Williams, Curtis, and Twin Peaks). 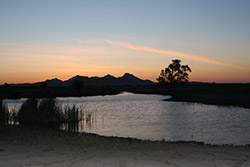 In the very center of the castellated core are the remnant deposits of a very deep lake that was formed during the volcanic eruptions of the Sutter Buttes. These layered deposits are mostly sands and gravels of andesite-dacite composition and are at least 1,000 feet thick. The lake may simply have filled a basin confined by volcanic domes, or the lake basin may have been excavated by powerful explosions during the andesite-dacite eruptive period. Today the lakebeds are surrounded and truncated by andesite-dacite domes that intruded into the layers and gently deformed and uplifted them to form a high central ridge in the Buttes.

At the end of volcanism about 1.4 million years ago, the castellated core and the rampart looked 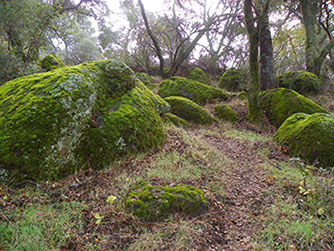 much as they do today. The castellated core was dominated by the youngest, tallest andesite-dacite domes. The rampart was a thick accumulation of pyroclastic-flow and lahar deposits. Over the past 1.4 million years, however, the erosional effects of rain, running water, and wind have cut down into the softest and weakest of the geologic materials of the Buttes. Streams and landslides have preferentially cut into the relatively weak shale and sandstone sedimentary layers to carve the moat valleys. Outward-flowing streams have also cut down through the pyroclastic debris layers to form distinctive radial valleys in the rampart. However, the elevations of the hard volcanic domes have probably not been lowered much by erosion.

HOW DID THE BUTTES GET THERE?

An important question is whether the Sutter Buttes are related to the Cascade Range, which extends from the volcanoes of southern British Columbia to Lassen Peak in northern California, or to 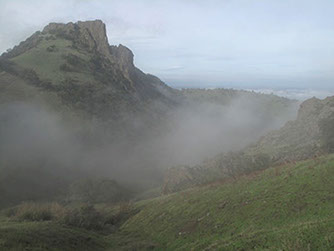 the Coast Range volcanic trend, which includes the Berkeley Hills volcanics, the Sonoma Volcanics, and the Clear Lake Volcanics (the youngest of these, with eruptions from 2.1 million years to 10,000 years ago). The Sutter Buttes do not fall on the geographic trend of either the Cascades or the Coast Range. However, the composition, texture, and age of the volcanic rocks suggest that the magmas that formed the Buttes are most likely part of the magmatic system of the Coast Range volcanoes.

But why did eruptions occur at this isolated location in the middle of the Sacramento Valley, far from other volcanoes? Geophysical studies have revealed a prominent north-south linear “ridge” that has anomalously high magnetism and gravity deep beneath the Sacramento Valley and directly under the Sutter Buttes. These geophysical features may be the expression of a buried, inactive fault that separates granitic and metamorphic rocks of the Sierra Nevada to the east from oceanic rocks of the Coast Range to the west. Additional faults intersect this deep crustal fault to provide possible conduits for Sutter Buttes magmas to rise to the surface. The Sutter Buttes contain the only lavas to erupt at the surface in the Great Valley, but rhyolites similar to those at the Buttes are found in the subsurface just to the west, along the Willows Fault.

The Sutter Buttes stand as a remarkable geographic and geologic feature of California’s Great Valley, and they remain a subject of scientific interest and research. One curious feature is the presence at the surface in the castellated core of a huge block, one-quarter mile across, of crystalline rock (Cretaceous granite) characteristic of the Sierran basement. How was this block carried upward to the surface? Or is it perhaps the tip of an upfaulted sliver of the basement deep below? This is one of many puzzles remaining for geologists to solve in future studies.